Two Tibetans have set themselves on fire in Rebgong 12th Nov. 2012

Two Tibetans have set themselves on fire in Rebgong (Ch: Tongren) in north-eastern Tibet’s Amdo Province (incorporated to China’s Qinghai Province), taking the total self-immolations to 10 in this month alone, fresh reports coming out of Tibet say.

Nyingkar Tashi, a 24-year-old Tibetan man, set himself on fire around 3:30 pm (local time) on Monday (12 November) at Dowa township in Rebgong.  He raised slogans calling for the long life His Holiness the Dalai Lama and freedom for Tibetans. He died on the spot. A photo shows his body completely engulfed in flames in front of a row of local Tibetans.

A large number of military convoys have been dispatched towards Dowa township, located some 100 kms from Rebgong county.

Local Tibetans say Nyingkar self-immolated when a large number of authorities from the Central and local government are camping in the town since yesterday, who blamed “outside forces for instigating self-immolations by Tamdin Tso and Kalsang Jinpa on 7 and 8 November respectively.

At a public meeting convened by county and local government officials in the town on Sunday, a local Tibetan official stunned the public when he said “the reasons for self-immolations are ban on keeping His Holiness the Dalai Lama’s photo and worshipping him, restriction on His Holiness the Dalai Lama’s return to his homeland, imprisonment of the Panchen Lama and lack of freedom in Tibet.”
The details of the another self-immolator are currently not known.

With the latest incident today, 72 Tibetans have self-immolated in Tibet calling for the return of His Holiness the Dalai Lama to Tibet and freedom for Tibetans. 57 of them have died. 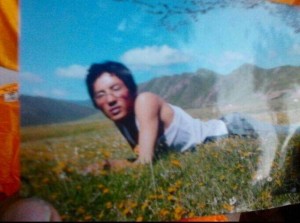